Since the economy needs all the jobs it can get these days I won’t take my latest observation to the CEO’s of Target, Wal-MArt, or (insert favorite grocery store here). Why do we have an army of people dedicated to the collection, organizing and returning of shopping carts? I was at a large Wal-MArt the other day and there were carts everywhere. Up on curbs, piled high in the parking spaces…everywhere. This may be becoming an overused phrase in this blog, but I wonder why we don’t do things the way they do in Europe? Maybe there are places that do things differently in the states somewhere, but I’ve never seen it.

The concept is simple. All the carts require a coin to use and you get the coin back when you return the cart to the line of other carts. Here is a picture: 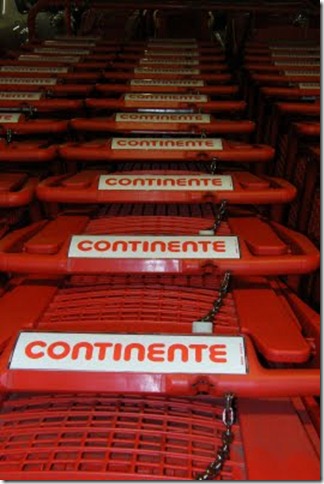 The only downfall I see to this here is that our coin of choice would probably be a quarter. In most places in Europe it was a Euro. (Dollar’ish) I think a lot of Americans would decide to leave the quarter behind for the laziness of not taking the cart back. I also think that a clever person would know this and make a pretty good chunk of change in a large parking lot chasing those lazy Americans quarters for them. I guess it would achieve the same goal. Some of the grocery stores even would give you a slug coin with their logo on it to carry around with you so you would always have “the coin” Just trying to help America.