I’m not sure how I happened to look at this on exactly the correct date, but today is the 2 year anniversary of the We Love Larry blog. Crazy. I would have given you everything I had if you would have told me I was still posting my silliness here 2 years ago. That would have meant that I still had my dad. I still do have my dad and I’m thankful for that every time I write here and I’m reminded of what started this weirdly ever changing blog. I’m also reminded that I’m lucky to have so many other people in my life. I hope at some point in the last two years I might have nudged a person here and there to think about or pass along the same sentiments to someone they love. If you are reading this and haven’t done that yet, do it now. Life is short and you might have 2 years more to tell funny stories or travel around like a fool, but you might not. “Get busy living”. The second part of the quote sucks, just do the first part and you’ll be fine.

I love all of you…that ought to cover it.

So I just returned home from one of the longest episodes of “Family Guy” ever. Apparently a side affect of being away from home for a while is basically, complete loss of brain function. Let me explain. I walked Jen to the car tonight as she was off to do some Jen type things. She waved goodbye to me FROM THE CAR and I waved back, so far so good. An hour or so later the kids and I decided on pizza from a local pizza joint. No problem…pick up the pizza in 20 minutes. Perfect. Have I mentioned that we only have ONE car? It seriously didn’t dawn on me that I couldn’t actually retrieve the pizza and I didn’t have a car until I was walking out the door. This is when I realized that due to a completely unrelated story of Christmas friendship and generosity, I had a working Vespa. Intriguing. Here’s how it was going to go down. It was dark, the temperature was a cool 55 degrees and I was about to traverse one of the busiest intersections in our area, next to the mall, a week or so from Xmas. I made it to the pizza joint no problem, paid for the pizza and then spent 15 minutes trying to determine how in the hell I was going to get a large pizza home on a scooter. Here’s what I worked out. 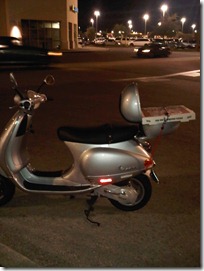 I’m sure my fellow Floridians had a good chuckle at the middle aged pizza delivery guy who got stuck delivering pizza in the 50 degree weather on Friday night. Eh, whatever. It was actually kind of adventurous. Sad, but true.