I have to have a talk with the Mennonites. As I sat in the airport yesterday I observed a large party of Mennonites hanging around also, seemingly, waiting for a flight. I get it that the Mennonites aren’t Amish and don’t shun modern conveniences, but here’s my confusion. As I watched this group of people dressed like a bad episode of Mayberry RFD, I also noticed that they all had cell phones, the kids were listening to iPods and the adults had gathered around sipping some Starbucks. What’s the point in dressing like it’s still 1890 if that’s your only concession? I also noticed that the women were not wearing any makeup, but if you have to wear a potato sack what’s the point? I respect different beliefs and ways of life, but it’s all or nothing people.

Last Saturday I decided to treat myself to a Starbucks coffee, a bike ride to get me there, and some Kindle time reading a new book. Everything was going great until Rain man dropped by. I took me only a  minute to realize that I had met this guy about a year prior (during my last quiet vacation to Starbucks). Like most people of his…ummm…type, he didn’t really care that I was reading a book or that the other two guys he decided to regale with his abilities were conversing. His shtick was the following:

- What day of the week any date that you gave him fell on.

- Year that each state joined the Union.

He proceeded to ask me and these other two guys a million questions simply so he could answer them and theoretically amaze everyone. The problem is that I didn’t want to be amazed and I’m also a skeptic. I theorized that all of this guys “knowledge” could be had by most people if they decided to waste a lot of time memorizing useless facts. What day of the week was March 13th, 1967? Monday. You know how I know? Google. I didn’t have to spend the better part of a portion of my life figuring out how the calendar works and factoring in leap years.

I kind of felt sorry for the guy and especially sorry for the other two guys as I clicked the power off on my book and said goodbye. I realized on the bike ride home that these “Rain men” are not so cool anymore since the proliferation of the internet and instant answers to everything. Like me, others are not as impressed that off the top of his head he knew that there were 102 counties in Illinois. Oh well…chalk it up to another lost art form humbled by the internet.

I just realized that I haven’t done a Larry update in quite a while, but I guess that’s a good thing. My mom doesn’t list me off a bunch of appointments or test results, so I don’t ask. I talked to him on the phone a bit ago and he seems quite Larry’ish. We talked baseball and pianos, which brings me to the subject of pianos. My mom and dad bought a piano about a thousand years ago when I was forced into excruciating lessons that forced my fingers into ungodly and un-musical positions. I quit taking piano lessons about 30 years ago, yet they still have this piano. The funny part is that my dads favorite joke is that he is sending me this piano. Do me a favor…can someone buy this thing off of them? They don’t actually know that I’m offering some of their “stuff” for sale, but make me an offer.

Since I’m posting a Larry update I might as well attach a picture. 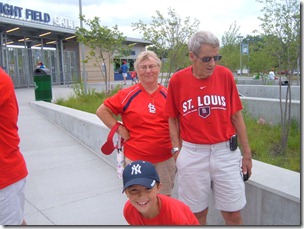 A visit to Kansas City last month. Must have been a sale on Yankee hats.