All of my transportation troubles aside we had a great time today wandering the Sjöfartsmuseet, a museum dedicated to the maritime history of Gothenburg, Sweden. There was an amazing collection of model ships for what seemed like every ship that must have sailed into the port. It occurred to me that I didn’t take a picture of the statue outside the museum that is a big deal over the skyline of Gothenburg, so the one I posted below is “borrowed”. We started calling her “Lucy” when we were looking for the museum as she was “in the sky” and our landmark to figuring out where to go. The reference was lost on Sara who prides herself on knowing everything like all 14 year olds. If you notice a stranger in the picture with us, it is Lisa, a visitor from Zimbabwe, and a friend of the family. I have no doubt I’ll be writing about her visit later as she is a VERY interesting and nice person. A couple of pictures in the meantime. 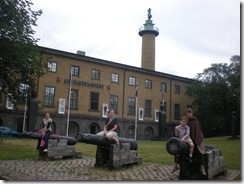 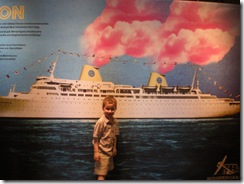 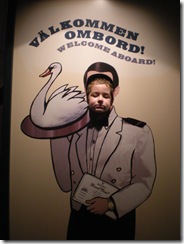 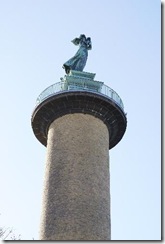 Here is a good write up about “Lucy” if you are inclined. (from Henrik)

One of Gothenburg's most famous sights is the high statue of "Sjömanshustrun" (the seaman's wife). It was built in 1933, in memory of all the swedish seamen that were killed during the WW1. 690 swedes, from 98 different ships, were killed during the war. And then Sweden wasn't even the war. Talk about stupid!?
Sjömanshustrun is a huge tower, 60 or 82 meter high (depending on how one counts) and is the highest monumental sculpture in Sweden. The symbol is that the wife is waiting for her husband to return, which he sadly enough never will. A strange thing is that she isn't looking out over the ocean, which she should be doing logicaly, but instead looking straight over the river, at the island Hisingen. One would think that it was me she was looking for, but the truth is that she's turned that way for a esthetic reason. As she stands now she's seen in profile from both the ocean and the harbour. It's possible to climb up in the tower, from where one will have one of the best views in the whole city. Unfortunately it's open only during the summer, although one can make a special request to be allowed in also during the rest of the year. Not sure how easy it is to get a permission though...? Seems like only school classes will be allowed in.
Once inside one can either take the elevator, or climb the 205 steps. At the bottom of the tower there is a huge sign with the name of all the killed seamen, where it also says which boat they were going with. The statue itself is five meters high, and made in bronze. It was built by the sculptor Ivar Johnsson and inaugurated by former swedish king Gustav V in 1933.