As a last second event not to be missed, one of our neighbors dropped by with a great offer. Two tickets to that evenings soccer match in Alesund. I was in the other room, but when I heard “tickets” and “fotball match” I wandered over to get a good listen. Seems our neighbor had season tickets for the local matches and wasn’t going and wondered if we could use them. Well cross “go to European soccer match” off our lists, because Sam and I went and had a great time. Sam, who is “bored” after about 5 minutes of doing anything that isn’t his idea, had a great time. There was even a couple of points where he was cheering for the home team.

In a bit of a “Larry Carroll moment” we sat next to Bridget from Wisconsin. Of course she had relatives in the Quad Cities and nodded her head when I said I was from Orion. She was teaching in the area for a year and was there with one of the neighbors from our little town. I guess it really is a small world.

We stayed for the entire game, which ended in a 1-1 tie. The fans for Alesund are much like I encounter at Cardinal games, wearing their colors, chanting and cheering, the there were two notable differences. One was the singing. I knew that European soccer matches where known for their displays of affection for their team, but singing the entire match was interesting. At least they were good singers. Second…as soon as the match was over everyone seemed like they were running to get home. It was weird. Everyone knows it is going to be crowded and jammed to get out, but there were literally people running to get to their cars. Maybe in America we are so used to sitting in lines that we just plod on and accept that when we get there we are going to sit and wait.

All in all, we had a great time. Special thanks to Per for letting us use his tickets. It was very kind. Sam is still sleeping, so it must have been fun. 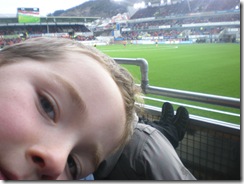