Spinning out of control

Great bike ride today. I have additional respect for my brother-in-law, John Wrenn, who has been using his bicycle as primary transportation now for years. I don’t want to go down the road of talking about how “seasoned” John Wrenn must be after riding bikes for that many years, but let’s just say he can have the softest seat in my house any time he visits.

We rode about 22 km today, into Middelburg, around, and then back. We saw quite a few things we hadn’t seen on our previous journeys. We bounced down many alley ways, side streets and possibly some place you aren’t supposed to ride your bikes. It’s relatively clear about where you can ride a bike, which is pretty much anywhere, but it isn’t so clear where you can drive your car. I have been riding on paths I think are pretty much good enough for a bike, only to find some joker in a FIAT Punto driving up my backside. I’ll have to post a couple of examples later. I have two shots from today's bike ride that sum up the kind of day it was. 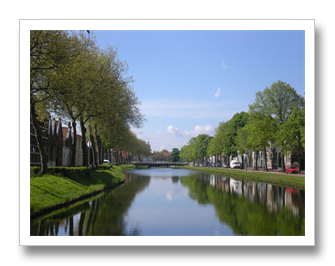